Greece’s most popular beach, also ranked among the “World’s Top 50 Beaches”, the Navagio on the Ionian island of Zakynthos, will re-open for the summer season after authorities and experts identified safe zones. 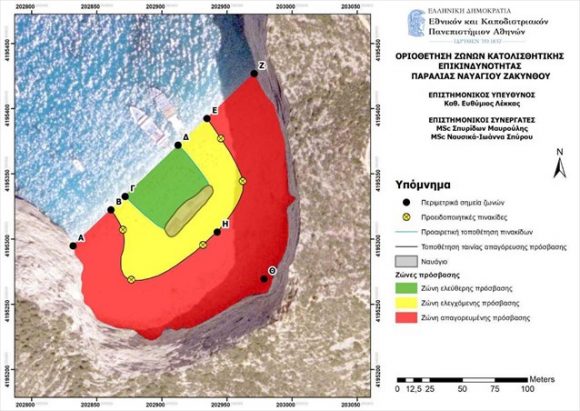 Accessibility to the world famous beach and one of the most photographed tourist destinations globally was banned after a landslide last year injured seven people.

However, a research team from the University of Athens headed by Efthymios Lekkas, a professor in Dynamic, Tectonic and Applied Geology & Natural Disaster Management, has identified three access zones based on geological, geotechnical and geomorphological criteria, using the latest in technology.

Also known as Shipwreck Beach, Navagio (which means shipwreck in Greek) is only accessible by boat. The famed beach got its name from the MV Panagiotis, which was transporting contraband cigarettes in the 80s’, when it went off course in bad weather and ran aground at a deserted beach on the northwestern side of Zakynthos known back then as Agios Georgios beach.

The shipwreck raised fears among island authorities that it would contaminate the waters of the beach, but instead it attracted thousands of visitors from across the globe, and Zakynthos’ inaccessible-by-land Navagio Beach became one of the most visited destinations in the world and repeatedly listed as one of the planet’s best beaches.

Besides attracting thousands of holidaymakers, in the last few years, Navagio Beach has become a meeting point for BASE jumpers, who host the yearly Go Fast Games there.